The Apache Ranger security admin UI allows you to assign users or groups a particular permission associated with a given Kafka topic. This is what is called a "Resource Based Policy" in Apache Ranger. However an alternative is also available called a "Tag Based Policy". Instead of explicitly associating the user/group + permission with a resource (such as a Kafka topic), instead we can associate the user/group + permission with a "tag" (we can also create "deny" based policies associated with a "tag"). The "tag" itself contains the information about the resource that is being secured.

The first step is to start Apache Atlas as per the previous tutorial. Note that we are not using the Apache Ranger authorization plugin for Atlas, so there is no need to follow step 2). Next we need to upload the Kafka entity of type "kafka_topic" that we are interested in securing. That can be done via the following command:
where "kafka-create.json" is defined as:
Once this is done, log in to the admin console using credentials "admin/admin" at http://localhost:21000. Click on "Tags" and "Create Tag" called "KafkaTag". Next go to "Search" and search for the entity we have uploaded ("KafkaTest"). Click on the "+" button under "Tags" and associate the entity with the tag we have created. 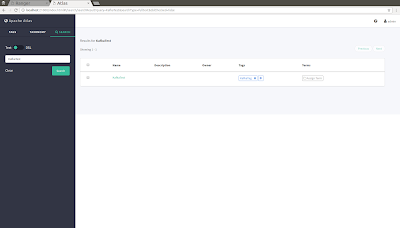 Next we will follow the first tutorial to install Apache Kafka and to get a simple test-case working with SSL authentication, but no authorization (there is no need to start Zookeeper as we already have Apache Atlas running, which starts a Zookeeper instance). Next follow the third tutorial to install the Apache Ranger admin service, as well as the Ranger plugin for Kafka. Create ("resource-based") authorization policies for the Kafka "test" topic in Apache Ranger. There is just one thing we need to change, call the Ranger service "cl1_kafka" instead of "KafkaTest" (this change needs to happen in Ranger, and in the "install.properties" when installing the Ranger plugin to Kafka).

To create tag based policies in Apache Ranger, we have to import the entity + tag we have created in Apache Atlas into Ranger via the Ranger TagSync service. After building Apache Ranger then extract the file called "target/ranger-<version>-tagsync.tar.gz". There are three alternatives available where the Ranger TagSync service can obtain tag information. From Apache Atlas via a Kafka topic, from Apache Atlas via the REST API and from a file. We will use the REST API of Atlas here. Edit 'install.properties' as follows:
Save 'install.properties' and install the tagsync service via "sudo ./setup.sh". It can now be started via "sudo ranger-tagsync-services.sh start".

Now we can create tag-based authorization policies in Apache Ranger. Earlier we used the name "cl1_kafka" for the service name instead of "KafkaTest" as in the previous tutorial. The reason for this is that the service name must match the qualified name attribute of the Kafka entity that we are syncing into Ranger.

In Ranger, click on "Access Manager" and "Tag Based Policies". Create a new "TAG" service called "KafkaTagService". When this is done go into the new service and click on "Add New Policy". Hit (upper-case) "K" in the "TAG" field and "KafkaTag" should pop up automatically (hence the import of tags from Atlas was successful). Add an "allow condition" for the client user with permissions to "consume" and "describe" for "kafka" as shown in the following picture: 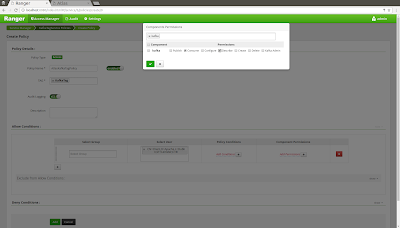 Finally, edit the "cl1_kafka" service we created and for "Select Tag Service" select "KafkaTagService" and save. Finally, wait some time for the Ranger plugin to download the new policies and tags and try the consumer again. This time it should work! So we have shown how Ranger can create authorization policies based on tags as well as resources.
Posted by Colm O hEigeartaigh at 8:28 AM