First let's look at setting up Apache Atlas. Download the latest released version (0.8-incubating) and extract it. Build the distribution that contains an embedded HBase and Solr instance via:
The distribution will then be available in 'distro/target/apache-atlas-0.8-incubating-bin'. To launch Atlas, we need to set some variables to tell it to use the local HBase and Solr instances:
Now let's start Apache Atlas with 'bin/atlas_start.py'. Open a browser and go to 'http://localhost:21000/', logging on with credentials 'admin/admin'. Click on "TAGS" and create a new tag called "user_topologies".  Unlike for HDFS or Kafka, Atlas doesn't provide an easy way to create a Storm Entity in the UI. Instead we can use the following json file to create a Storm Entity for "*" topologies:

You can upload it to Atlas via:
Once the new entity has been uploaded, then you can search for it in the Atlas UI, then click on "+" beside "Tags" and associate the new entity with the "user_topologies" tag.

Now let's create a tag-based authorization policy in the Apache Ranger admin UI. Click on "Access Manager" and then "Tag based policies". Create a new Tag service called "StormTagService". Create a new policy for this service called "UserTopologiesPolicy". In the "TAG" field enter a "u" and the "user_topologies" tag should pop up, meaning that it was successfully synced in from Apache Atlas. Create an "Allow" condition for the user "alice" with all of the component permissions for "Storm": 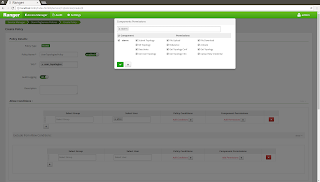 We also need to do is to go back to the Resource based policies and edit "cl1_storm" and select the tag service we have created above. Finally, edit the existing "cl1_storm" policy created as par of the previous tutorials, and remove the permissions for "alice" there, so that we can be sure that authorization is working correctly. Then follow the first tutorial and verify that "alice" is authorized to deploy a topology as per the tag-based authorization policy we have created in Ranger.
Posted by Colm O hEigeartaigh at 7:20 AM