Apache Ranger 0.6 has been released, featuring new support for securing Apache Atlas and Nifi, as well as a huge amount of bug fixes. It's easiest to get started with Apache Ranger by downloading a big data sandbox with Ranger pre-installed. However, the most flexible way is to grab the Apache Ranger source and to build and deploy the artifacts yourself. In this tutorial, we will look into building Apache Ranger from source, setting up a database to store policies/users/groups/etc. as well as Ranger audit information, and deploying the Apache Ranger Admin UI.

The Apache Ranger Admin UI requires a database to keep track of users/groups as well as policies for various big data projects that you are securing via Ranger. In addition, we will use the database for auditing as well. For the purposes of this tutorial, we will use MySQL. Install MySQL in $SQL_HOME and start MySQL via:
Now you need to log on as the root user and create three users for Ranger. We need a root user with admin privileges (let's call this user "admin"), a user for the Ranger Schema (we'll call this user "ranger"), and finally a user to store the Ranger audit logs in the DB as well ("rangerlogger"):
Finally,  download the JDBC driver jar for MySQL and put it in ${rangerhome}.

You will need to install the Apache Ranger Admin UI using "sudo". If the root user does not have a JAVA_HOME property defined, then edit ${rangerhome}/setup.sh + add in, e.g.:
Next edit ${rangerhome}/install.properties and make the following changes:
Now you can run the setup script via "sudo ./setup.sh".

After a successful installation, we can start the Apache Ranger admin service with "sudo ranger-admin start". Now open a browser and go to "http://localhost:6080/". Log on with "admin/admin" and you should be able to create authorization policies for a desired big data component. 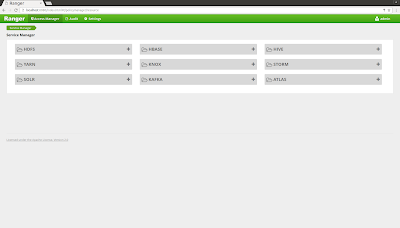 Posted by Colm O hEigeartaigh at 5:22 AM