Apache Syncope is a powerful and flexible open-source Identity Management system that has been developed at the Apache Software Foundation for several years now. The Apache Syncope team has been busy developing a ton of new features for the forthcoming new major release (2.0.0), which will really help to cement Apache Syncope's position as a first class Identity Management solution. If you wish to experiment with these new features, a 2.0.0-M4 release is available. In this post we will briefly cover some of the new features and changes. For a more comprehensive overview please refer to the reference guide.

Perhaps the first new concept you will be introduced to in Syncope 2.0.0 after starting the (Admin) console is that of a domain. When logging in, as well as specifying a username, password, and language, you can also specify a configured domain. Domains are a new concept in Syncope 2.0.0 that facilitate multi-tenancy. Domains allow the physical separation of all data stored in Syncope (by storing the data in different database instances). Therefore, Syncope can facilitate users, groups etc. that are in different domains in a single Syncope instance.

After logging in, it becomes quickly apparent that the Syncope Console is quite different compared to the 1.2.x console. It has been completely rewritten and looks great. Connectors and Resources are now managed under "Topology" in the menu on the left-hand side. Users and Groups (formerly Roles) are managed under "Realms" in the menu. The Schema types are configured under "Configuration". A video overview of the new Console can be seen here. 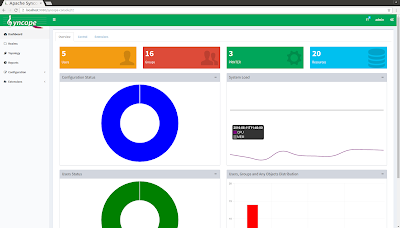 With Syncope 1.2.x, it was possible to define plain/derived/virtual Schema Types for users, roles and memberships, but no other entities. In Syncope 2.0.0, the Schema Types are decoupled from the entity that uses them. Instead, a new concept called an AnyType class is available which is a collection of schema types. In turn, an AnyType object can be created which consists of any number of AnyType classes. AnyType objects represent the type of things that Apache Syncope can model. Besides the predefined Users and Groups, it can also represent physical things such as printers, workstations, etc. With this new concept, Apache Syncope 2.0.0 can model many different types of identities.

Another new concept in Apache Syncope 2.0.0 is that of a realm. A realm encapsulates a number of Users, Groups and Any Objects. It is possible to specify account and password policies per-realm (see here for a blog entry on custom policies in Syncope 2.0.0). Each realm has a parent realm (apart from the pre-defined root realm identified as "/"). The realm tree is hierarchical, meaning that Users, Groups etc. defined in a sub-realm, are also defined on a parent realm. Combined with Roles (see below), realms facilitate some powerful access management scenarios.

Syncope 2.0.0 also has the powerful concept of dynamic membership, which means that users can be assigned to groups or roles via a conditional expression (e.g. if an attribute matches a given value).

An exciting new feature of Apache Syncope 2.0.0 is the new Apache Camel provisioning engine, which is available under "Extensions/Camel Routes" in the Console. Apache Syncope comes pre-loaded with some Camel routes that are executed as part of the provisioning implementation for Users, Groups and Any Objects. The real power of this new engine lies is the ability to modify the routes to perform some custom provisioning rules. For example, on creating a new user, you may wish to send an email to an administrator. Or if a user is reactivated, you may wish to reactivate the user's home page on a web server. All these things and more are possible using the myriad of components that are available to be used in Apache Camel routes. I'll explore this feature some more in future blog posts. 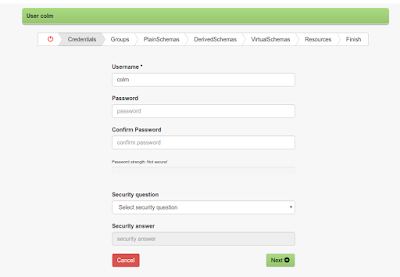 Another new feature of Apache Syncope 2.0.0 is that of the CLI client. It is available as a separate download. Once downloaded, extract it and run (on linux): ./syncopeadm.sh install --setup. Answer the questions about where Syncope is deployed and the credentials required to access it. After installation, you can run queries such as: ./syncopeadm.sh user --list.

I updated the testcases that I wrote before to use Apache Syncope 2.0.0 to authenticate and authorize web services calls using Apache CXF. The new test-cases are available here.
Posted by Colm O hEigeartaigh at 8:17 AM